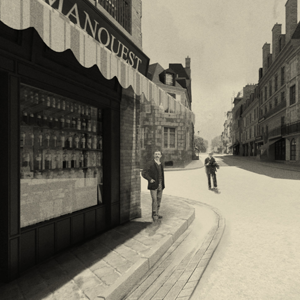 The town of Flers was partially "razed" during the bombings of the Second World War and few Flers residents remember or know what their town looked like before 1944. ARTEFACTO has created a digital discovery trail of the old town centre for the Communauté d'Agglomération du Pays de Flers.

The virtual tour application developed by ARTEFACTO and customised for this project is the digital guide for this new kind of discovery tour, like a GPS to go back in time.

It integrates geolocated 3D virtual reconstructions of seven points in the city as well as media galleries and sound commentaries. As the visitor travels, he or she is geolocated and can compare the city today with its past.

A LEAP IN TIME

With your tablet or smartphone in hand, take a stroll through seven key locations.

To become a "time tourist", you have two choices: borrow a tablet with the application installed from the Flers Tourist Office or download it onto your smartphone.

The operation is very simple, you just have to follow the map and place yourself at the markings on the ground (small blue drops placed judiciously along the course and pointing to the direction to take).

The streets of the 19th century in 3D

The walk begins in 19th century Flers, where you can consult old postcards, listen to or read about the history of the place and above all "immerse" yourself in the main square as it was at the time, thanks to a 3D reconstruction. "Immerse", more precisely, because the virtual reality allows you to see this reconstruction in 360°, to be discovered thanks to the gyroscope of your tablet.

During its inauguration this summer by the mayor of Flers, the latter specified that it was not a media stunt but a global approach to promote the town. He also praised the work of the Artefacto company, which, according to the mayor, had produced a "work of art".

See the virtual Flers teaser produced by the Communauté d'agglomération du pays de Flers and the city of Flers:

Install it quickly on your smartphone!

The Flers Virtuel application can be downloaded from the following stores on smartphones Android.