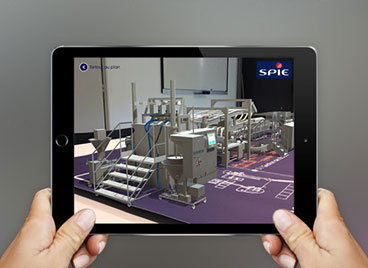 Organisations such as NASA and Boeing had already understood this since the 1980s, augmented reality is a technology that is perfectly suited to an industrial environment. Whether it is a headset or an application, the overlay of 2D or 3D information has become the basis for a multitude of tools. From now on, professionals in the sector are also using it as a sales support application.

Did you know? Augmented Reality (AR) isa technology that displays a 2D or 3D object in the real environment through the video stream of a device (smartphone, tablet or even headset, glasses and even windscreen).

Thanks to this technology, it is now possible to display any object in 3D in real life, regardless of its size. In the industrial equipment sales sector, AR is becoming a powerful tool for presenting a machine or a production line on the move. Especially since 3D AR models can be animated to illustrate the operation of a robot, for example. In addition to the stunning effect of augmented reality, it is also a strong element of reassurance for the customer since it allows him to project himself and to apprehend the space occupied by these machines.

Beyond the strictly technological aspect, augmented reality is becoming an indispensable feature of a more global tool. Imagine being able to project a full-size industrial line or construction vehicles at a trade fair or at a customer's premises, and then place orders from this same tool. Practical and above all impressive! It is now common to come across sales teams equipped with this type of sales support application thanks to augmented reality. For example, GEPPIA called on Artefacto to create a dedicated application.

The GEPPIA (Groupement des équipementiers du process et du packaging des industries agroalimentaires et non-alimentaires) brings together manufacturers of machines dedicated to the agri-food industry; its role is to propose a complete offer. With a view to improving the competitiveness and quality of service in its sales process, GEPPIA asked Artefacto to develop an application to present the various products of its partner equipment manufacturers in 3D and in augmented reality. The entire industrial line is represented on a marker that you just have to aim at, then select the desired model. Information sheets are also provided for each product. The customer can then configure the line, understand how it works and place an order on the spot.

The GEPPIA now uses this mobile application at its various trade fairs around the world as a salestool.

Although augmented reality has largely proven itself in the field, the technology continues to evolve. Most recently, Apple's ARKit and Google's ARCore The latest developments in augmented reality include the elimination of markers, so that surfaces can be scanned directly and any 3D object can be placed on them quickly, smoothly and realistically. Finally, the next step is to improve the quality of the 3D to offer a very photorealistic rendering. Soon, there will be no boundary between the real and virtual environment.