Augmented reality (or AR) is a technology that allows the integration of virtual elements in 3D (in real time) within a real environment. The principle is to combine the virtual and the real and give the illusion of perfect integration to the user.

Augmented reality: over 40 years of history

In the 1980s, HUD (head-up displays) systems were developed, particularly in the army. This system allows some information to be displayed through a small transparent screen, located in the driver's field of vision.
These HUDs are currently used in some vehicles to display information such as speed, destination roads or signs encountered. 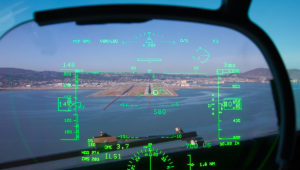 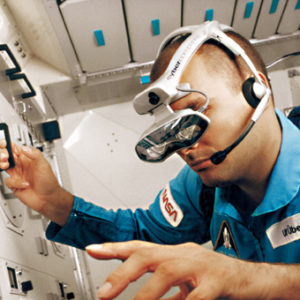 It was not until the 1990s that the term "augmented reality" was mentioned. Indeed, Tom Caudell and David Mizell, two employees of Boeing, developed a tool for the group's employees working on production lines. This system added a layer of information to certain elements of the line, making it possible to have a technical map attached to the physical element.

In 1994, Rekimoto and Takashi, two scientists working for Sony Computer lab, developed NaviCam, the first augmented reality system capable of reading markers. Very basic and fast, it allowed to launch textual information that was grafted to the real world through a helmet equipped with a HUD. The markers will become the reference support in order to fix virtual elements in the real by offering a very fast response time.

Markers are visual cues detected by the device to perform an action. They can take the form of an image or a symbol, but must above all offer a high contrast in order to optimise detection. They are used as markers to fix a 3D element through the camera, which is essential to the device.

However, markers will eventually disappear, thanks to the technological advances offered by Apple and Google. We will develop this part later in the page.

Smartphones and tablets, the ultimate stage of AR. 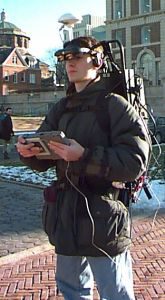 The first "mobile" version of augmented reality was developed in the late 1990s and required a backpack connected to a screen. The whole thing was heavy, cumbersome and drastically limited viewing capabilities. It was more of an experimental project than a real consumer tool.

However, this was a precursor to what mobile augmented reality would become. The advent of mobile phones, and more particularly smartphones, has made it possible to miniaturise this type of device: camera, screen and on-board computing have made it possible to develop truly mobile and relevant applications.

This technological advance comes from two American giants, Apple and Google, who have developed new augmented reality systems embedded directly in the operating system of smartphones and tablets.
Named respectively Arkit for Apple and ARcore for GoogleThese systems detect space, the user's position and ambient light. This allows the 3D element to be displayed and fixed on the scanned surfaces. With positional sensing, it is now possible to simulate a complete virtual room and move around inside it using a smartphone or tablet. We also use these technologies at Artefacto for our augmented reality applications such as Urbasee.

Unlike virtual reality, augmented reality was mainly developed for experimental and professional purposes (army, industry, etc.). Very quickly, companies understood the stakes of this technology and sought to appropriate it. However, technological barriers have long limited its use. It was necessary to use a computer, a screen and other cumbersome peripherals that were difficult to use in the field. With the advent of smartphones and tablets, the AR sector is booming and many companies are finding business purposes in their use. Let's take a look at them.

The augmented reality in real estate has developed mainly via tablet-based visualisation tools. The possibility of previewing a building before construction is a real added value for professionals because it reinforces the capacity of projection of a potential investor and thus, greatly facilitates the marketing in VEFA.
In addition, it is possible to interact with the projected 3D model from the screen. This is primarily a functionality, and is most often integrated into an application offering other content on the project.
There are two "types" of augmented reality that are common in the real estate industry: on plan (or marker) and on site.

Augmented reality on a map

Augmented reality on a map (or marker) consists in displaying a 3D model by aiming at a 2D plan. Integrated into an application dedicated to the project, augmented reality on a marker is one of the key tools for the visualisation of a property in 3D.
It is also very attractive in the context of a real estate show and offers interactivity that will make it possible, for example, to remove floors, to offer access to maps, to download plans, etc. 360°It is a good way to get a feel for the property. It is a good alternative to physical models. 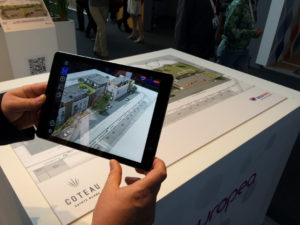 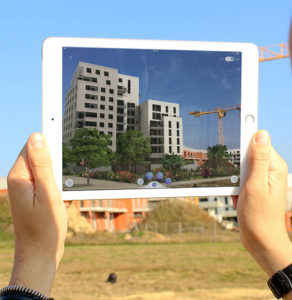 On-site augmented reality offers the possibility of displaying a 3D model directly on the construction site at 1:1 scale. It provides excellent immersion and increases investors' projection capacity tenfold by bringing them face to face with the project in reality and gives a good overview of the integration of the architecture. However, it requires a visit to the construction site in order to "track" the reality and to fix the final project in 3D. It is therefore a very good complement to marker-based reality. In the case of a house builder, this technology can allow him to build a real catalogue of houses in 3D that he can project on his customers' land.

It responds to a problem well known to industrialists: showing what is difficult or impossible to move, such as production lines or agricultural machinery at trade fairs, for example.
Integrated into a mobile application, it is possible to demonstrate its operation in a very faithful way. The flows or moving parts are animated (articulated arms, gears, characters, etc.) and make it easy to understand the operation of a machine or an object presented. Interactive parts can also be added, allowing access to additional elements of understanding: information sheets, zoomed elements, videos. 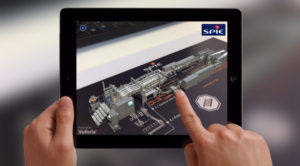 There are also the catalogue applicationswhich allow products to be shown in augmented reality. This type of application is a new tool for the salesperson, or is available for free download, and allows a product to be integrated in 3D at real size, anywhere. Combined with an integrated purchasing system, it is possible, for example, to try out a sofa or a wardrobe at home to see if it is suitable, and to buy it directly from the application. A small revolution for e-commerce with this dematerialised fitting! Artefacto has also chosen to take this route to market its tool Urbaseewhich you can try for free. 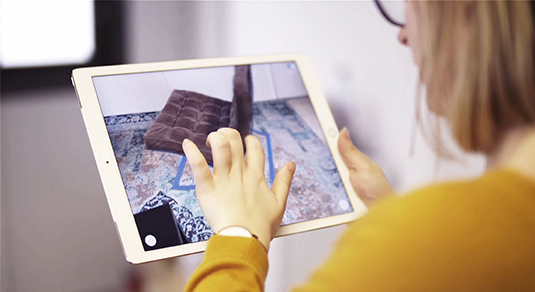 The augmented reality in museums is also not to be outdone and several purposes exist. It can be used to project in 3D objects that have disappeared or are inaccessible, as part of reconstructions of the past.
It can also be perfectly integrated into playful applications with the display of augmented reality elements such as characters or points of interest that will enrich the visit and give visitors the opportunity to focus on architectural elements, for example. The objective for museums is therefore to offer enhanced, augmented visits by providing enriched content.
Augmented reality also serves as an educational tool for children, to manipulate and play in a cultural context and give them other keys to understanding. Integrated into a fun game, they will come out happy and above all full of knowledge! 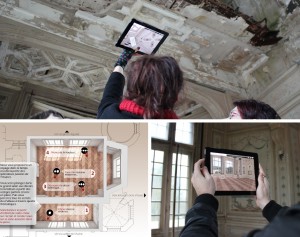 A bright future for augmented reality

Augmented reality experienced a major upheaval in 2016. Indeed, following the huge success of the smartphone game Pokémon Go! (the most downloaded application of all time), the notoriety of this technology has drastically increased, giving it the opportunity to be known by the greatest number of people. Augmented reality is now easily understood by the general public.

We can also mention Snapchat, which has been integrating augmented reality filters (lenses) for several years now. Without really knowing it, the general public is already using this technology!

The future of technology?

In fact, several solutions can be envisaged in the more or less short term.

Initially, the continuation of the ARKit and ARCore adventure for augmented reality on mobile seems to be the most promising short-term solution. Apple is extremely involved in augmented reality and is continuously improving its tool. The next update, available on iOS 12, brings several features such as multiplayer, as well as a new application integrated into the new OS.

In the longer term, the future of augmented reality is likely to lie in augmented reality headsets and glasses. Commonly referred to as " mixed reality", this technology can be defined as an enhancement to augmented reality. Initiated by Microsoft's Hololens in 2015, it is now followed by the Magic Leap One, or the Meta 2. The particularity of these headsets is that they scan the entire surface of a room, allowing any virtual object to be placed there. This could potentially be a revolution in the way we consume content. Imagine an infinitely changeable virtual overlay, visible to anyone wearing a device. Apple is also said to be on board, with a more than well-founded rumour talking about the development of augmented reality glasses for 2020. This would also fit in with the Cupertino firm's recent acquisitions of specialised companies.

As you can see, we are on the verge of a massive transformation of our digital content consumption.

Want to know more about augmented reality? Download our infographic!